‘Within’ brings together a cross-generational group of artists in a light-handed and intuitive grouping of works to tease out some feelings about enclosure, the body, space and landscape and the psychological dimension.
Each of these artists, in their own exemplary manner deal with interior space, whether that of the psyche, the architectural, or the imaginative and metaphorical. There are few ‘stylistic’ links here – rather a shared attitude of serious immersion in the nature of perception and subtleties of individualized image making, with an at times willful surrealism – not the textbook ‘surrealism’ of the early 20th century, but that of individuals grappling with personal touchstones and symbolism, processing feelings and imaging the intuitive.

Peter Booth’s small, gestural and apparently non-objective painting, from 1975, conjures feelings of anxiety and flux, a choppy mindscape inviting supposition and an emotional response – we might question the ability of ‘paint’ to carry meaning yet we inevitably project our own feelings into this surface…we are within the image as we try to figure it out.
Louise Bourgeois’ ‘Fear’ a small intaglio from 1999, made late in her life, depicts several figures encased in tent-like forms – are they sheltering from a threat, or wrapped and complicit in it? As an artist deeply embedded in her familial and emotional biography she underlines the manner in which we all carry our history within, and how we can both mine it for meaning and yet also be captive to it.
Hanna Tai, in her recent photographs of found visual conundrums, invokes the surreal - strange or happenchance juxtapositions. As such we try to reconcile the utilitarian with the symbolic, and end up hyper-aware and sensitive to how form is fashioned, often nonsensically. In ‘Mind and Matter’ circumstance has resulted in the embedding of statuary back into ‘dumb’ stone whence it came – characters and meaning made mute.
Both Paul Boston and Benjamin Armstrong deal here with the body – or at least allusions to it. In Armstrong’s ink on paper ‘A new plan’, two eyes, separated from their body and enclosed in a drawer like structure, each stare intently and perhaps unendingly at the other. Is this an allusion to endless self-reflection? Certainly we are in the psychological realm here - do these eyes continue to stare deeper and deeper into a reflective abyss or maybe just wait for the other to blink.
Paul Boston’s works invite you on a contemplative journey, his forms alluding to the body within and of the landscape - yet just as you are moving deep via an illusionistic portal you are brought back to the surface and back to the abstraction of much of his language. And then on again, repeating this cycle, each time with slight perceptual adjustments as you attempt to reconcile form within form within form…
The figure in Tim McMonagle’s immersive painting ‘That’s the style, Mary’ appears to be mining something – meaning perhaps. Enclosed in an orifice like space, she in truly within, surrounded on all sides by the earth. In the reverie of her discovery, the claustrophobia of her predicament melts away. Time and effort have brought her here and a result is at hand!
Sally Ross also evokes that from below - a plume of smoke and ash spews from the depths in her ‘Volcano (grey)’ 2013, but the usually threatening phenomena from deep within the earth here becomes a stage for playful graphic invention – swirling, almost psychedelic patterns writhe and twist. The original photographic source for this and much of her other recent work allows her a platform from which to burrow deep inside the subject with her characteristic sensibility.
Finally, with three small and early oil on board paintings by David Noonan we appear to have arrived at an objective reality. But these images are at least two steps at remove from the real - painted from photographs found in magazines, we are also reminded of his interest in cinema - in this sequence of images we appear to be zooming in, from a wide landscape into an interior and further into a corner of a drab room, where even the relative banality of a sink nevertheless holds our focus and interest, with its painted fidelity to its subject.

Much in the world takes us outside of ourselves, entertaining us as we bounce from one surface to another to only glancing effect – here these artists and their works, like the figure in ‘That’s the style, Mary’ dig deeper to excavate something meaningful from within.

Posted by Admin at 1:37 AM No comments: Links to this post 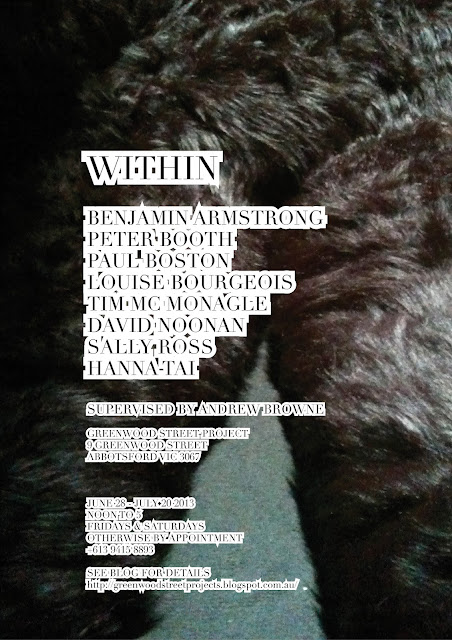 Posted by Admin at 10:21 PM No comments: Links to this post

Posted by Admin at 12:10 AM No comments: Links to this post